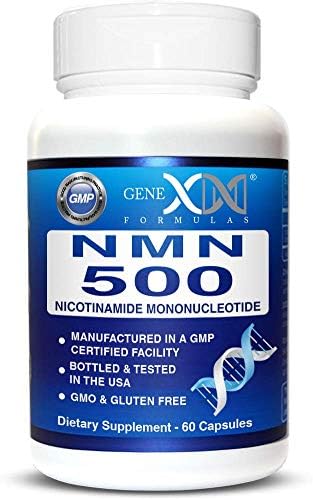 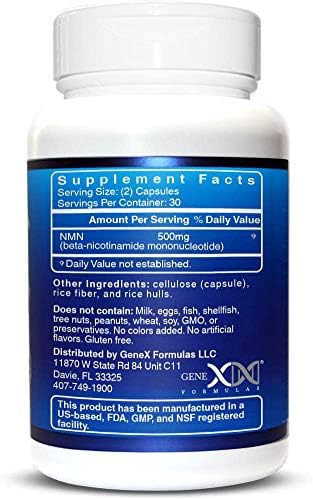 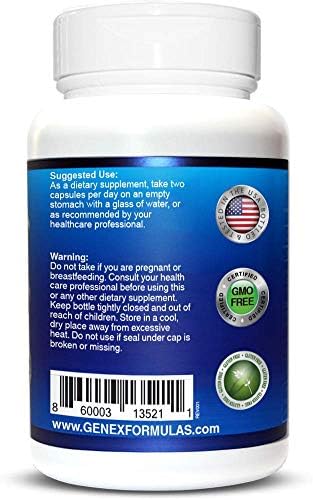 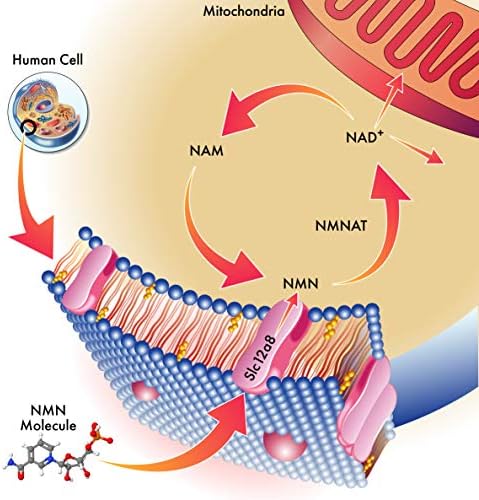 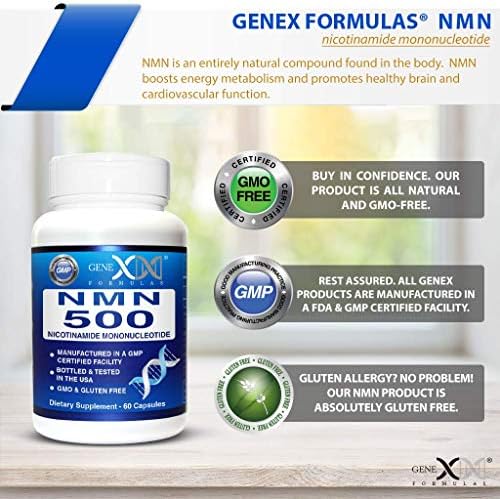 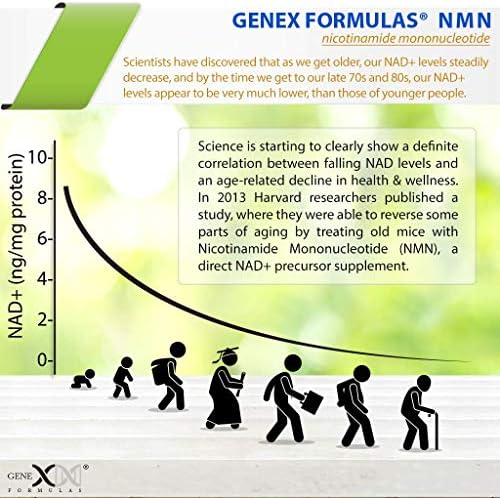 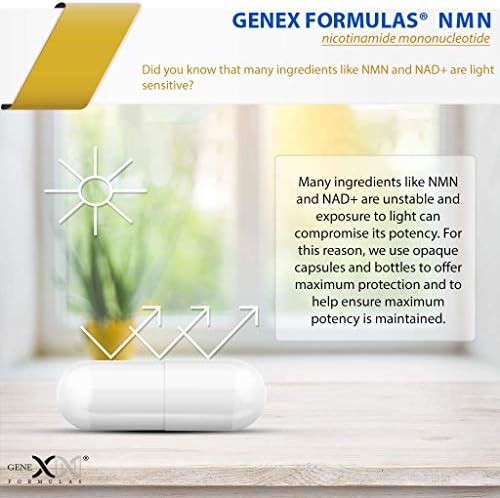 DOES YOUR NMN SUPPLEMENT HAVE GMP ON THE BOTTLE? OURS DOES AND, HERE IS WHY IT IS IMPORTANT.

Many supplements claim that their product is manufactured in a GMP facility but is it displayed on the bottle? If not, it is because the manufacturer will not allow the claim to be made if they are NOT a GMP facility. All Genex Formulas products are manufactured in a GMP certified facility and we proudly display this on our labeling. This is extremely important since GMP (which stands for ‘Good Manufacturing Practices) are a set of best practices for dietary supplement manufacturing in the United States. Establish, maintained, and updated by the U.S. FDA, these regulations establish the baseline requirements for dietary supplement companies and manufacturers looking to produce dietary supplement products. Covering everything from labeling and packaging to ingredient sourcing and formulation – GMPs have been put in place for each step of the dietary supplement manufacturing process. Along with acting as a quality control and assurance measure, GMPs requirements help ensure that dietary supplement products consistently meet specifications for purity, strength, and composition. GMPs are overseen and enforced by a number of well-established and credentialed third party auditors, like NSF.

NMN is an entirely natural compound found in our bodies. Various food sources also contain this compound in minuscule amounts. Edamame which has one of the higher contents, only show less than 1.9mg/100g. NMN is a direct and potent NAD+ supplement. Mice given an oral supplement of NMN showed increased liver NAD+ levels in just 10 minutes and showed an increase in muscle tissue by 30 minutes. Increased NAD+ levels stimulate energy DNA repair and SIRTUIN activity. SIRTUINS are the longevity-genes shown to be active during caloric restriction and life-extension in many animal models.

NAD+ helps to breakdown food like sugars into energy. Promotes Healthy Cardiovascular Function. DNA Repair – NAD+ is used to repair broken DNA strands. SIRTUIN Activator – NAD+ is required for our longevity genes to work. NMN is THE compound used by Harvard Scientists to reverse some signs of aging tissue in mice that started the rush to NAD supplements.

Scientists have now confirmed a direct link between falling NAD+ levels and aging in both animals and human subjects. A breakthrough study published by Harvard scientists in 2013 showed for the first time that some aspects of aging might be reversible. After treating old mice with NMN, several biometric markers that were subsequently measured resembled those of young mice: “the human equivalent of a 60-year old with markers resembling that of a 20-year old”. The research and understanding into NAD+ metabolomics are ongoing, but what the science has highlighted thus far, is the importance of supporting and maintaining our NAD+ levels.A long-term evaluation of oral supplementation of NMN in mice was found to be effective at improving NAD+ levels safely. Mice supplemented with NMN vs. a control group showed notable age-associated differences in mass, energy, blood sugar, lipid, gene expression changes, mitochondrial oxygen use, eye function, bone density and immune function with no apparent toxic effects. These statements have not been evaluated by the FDA. This product is not intended to diagnose, treat, cure or prevent and diseases.

Is there a correlation between falling NAD levels and aging?

Scientists have discovered that as we get older, our NAD+ levels steadily decrease, and by the time we get to our late 70s &80s, our NAD+ levels appear to be much lower, than those of younger people. The science is starting to clearly show a definite correlation between falling NAD levels and an age-related decline in health & wellness. In 2013 Harvard researchers published a study, where they were able to reverse some parts of aging by treating old mice with NMN, a direct NAD+ precursor supplement. After ten days of treatment, key biometrics markers measured resembled those of much younger mice. For the first time, we have real evidence that some aspects of aging may be reversible. In 2017 the same team published a follow-up article. It demonstrated a new understanding of how NAD+ is not only used to repair damaged DNA but how it also stimulates the repair process. It does this by blocking another protein called DBC1 that interferes with the PARP-1 DNA Repair enzyme.

How NMN is taken up into cells has not been entirely clear. However, a recent study has identified that Slc12a8 is highly expressed and regulated by NAD+ in the small intestine. When NAD+ levels are low, the cells respond by turning on more Slc12a8 transporters. It has been further shown that Slc12a8 specifically transports NMN and not NR. The study demonstrates that Slc12a8 has a critical role in regulating intestinal and systemic NAD+ supply.

The Power of Three! Why NMN, Resveratrol & Berberine is a Powerful Combination

So far, at least three major longevity pathways have been identified by researchers. The SIRTUIN gene regulators that silence genes and repair DNA, the AMPK activated pathway, and the mTOR pathway which influences cell division and growth.

The power of three, positively promote these synergistic pathways to better our chances of a favorable outcome when supplemented together. NMN is excellent, as it provides the fuel for Sirtuins and the substrate for DNA repair. However, Resveratrol is also very important as it independently activates Sirtuins and to a lesser extent, inhibits mTOR activity. Finally, Berberine which is one of the better studied natural plant extracts is a good AMPK activator that stimulates mitochondrial biogenesis and offers other benefits by turning on genes similar to those turned on by exercise.

NMN is an entirely natural compound found in our bodies. Various food sources also contain this compound in minuscule amounts. Edamame which has one of the higher contents, only show less than 1.9mg/100g. NMN is a direct and potent NAD+ supplement. Mice given an oral supplement of NMN showed increased liver NAD+ levels in just 10 minutes and showed an increase in muscle tissue by 30 minutes.

Increased NAD+ levels stimulate energy, DNA repair, and SIRTUIN activity. SIRTUINS are the longevity-genes shown to be active during caloric restriction and life-extension in many animal models.

At Genex, we chose to use an all-natural and organic source of Resveratrol that was extracted from Japanese knotweed (also known as Polygonum cuspidatum root) which contains 50% Trans-Resveratrol. Resveratrol has several remarkable properties that help to support good health. Most commonly, Resveratrol is known as the longevity supplement found in red wine and generally as an effective antioxidant. Resveratrol is also the most potent naturally occurring direct SIRTUIN activating compound.

AMPK Activator Berberine is a natural plant-based compound found in several different plants, including Barberry (Berberis vulgaris). Berberine is known as a direct AMPK activator. The AMPK pathway, in short, is one of the things that happens during exercise, the expression of a set of genes known to promote longevity. Both human and animal studies show Berberine may have the potential to support healthy blood sugar levels, already in the normal range. Berberine may also help support healthy cholesterol, gut, brain, heart, and inflammation. Berberine is a general health and wellness supplement that has been used as a traditional herb for thousands of years.

There are many cheaper alternative sources to buy NMN today, but are you getting what you paid for? If the price for NMN is too good to be true, it probably is not NMN. We use pharmaceutical grade NMN in our product, so get what you pay for, buy Genex!
FULLY STABILIZED – Our NMN comes in a completely shelf-stable non-refrigerated form. We use opaque jars and desiccant packs to protect it from light and moisture to ensure it maintains maximum potency.
Certified 99% Pure NMN – Direct NAD+ Precursor Supplement SIRTUIN Activator – NAD+ is required for our longevity genes to work.
Dr. Sinclair’s Recent trials show Old Mice treated with NMN restored blood vessel capillary density.

Price: (as of – Details) Meaningful Beauty is an exclusive anti-aging skincare system that helps visibly rejuvenate the skin and